End violence between Gaza and Israel

Since 1948, AFSC has worked with Palestinians and Israelis to achieve a just and lasting peace. Today, through our staff and partners, we work with young people in Palestine as well as in Israel, countering militarism and focusing on ways communities can meet pressing humanitarian, social, and educational needs.

As the situation in Gaza and Israel unfolds, we will bring you AFSC's latest statements, resources, and stories from the people affected by the conflict.

Voices from the Gaza-Israel Conflict
GAZA (Nov. 21, 2012) Stories from the Palestinians whose lives are affected by the conflict. More. In Gaza: Dreaming with their feet on the ground
OXFORD, UK (Nov. 18, 2012) Monthly visits to Gaza have shown Patricia Sellick what peace would mean for its youth. More.

AFSC calls for an immediate end to violence in Gaza and Israel
PHILADELPHIA (Nov. 17, 2012) As the violence escalates in Gaza and Israel, we are compelled to lift our voice in support of nonviolence and human rights for all. More.

Quakers call for immediate end to use of force in Gaza
PHILADELPHIA (Nov. 21, 2012) AFSC and other Quaker organizations have signed on to a statement issued by Britain Yearly Meeting in response to the violence in Gaza. More. 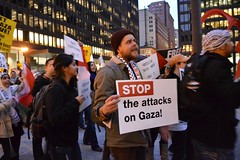